The last issue of »Hrvatski vojnik« (The Croatian Soldier), the first Croatian professional military magazine, bi-weekly journal of the Ministry of Defence, published the hundredth column titled “Veksilologija” (Vexillology) by Željko Heimer. This sequel is a kind of summary and review of so far published.

The magazine is available on http://www.hrvatski-vojnik.hr/pdfmagazin/hv_494.pdf, and there are also available the previous columns as well. Here we quote the latest sequel in full text (translated for your reading pleasure):

When I was contacted by the Hrvatski vojnik editorial board full four years ago, I joyfully accepted their proposal to write something about military flags for our magazine. None of us then could have dream that the new column could last so long to reach its hundreth sequel. On the page 47 of the first issue of Hrvatski vojnik in then new bi-weekly scheme, in number 394 of 27 April 2021, the column Vexillology appeared, for the first time in the Croatian journalism under such a name, although the word was recorded in the Croatian print already in 1982 with the issue of the translated book by Whitney Smith Flags and Arms of the World published by Globus, Zagreb. Since then, until this issue, with prestigious brand positioning three pages from the back, we are counting thus a hundred issues.

The interes shown by the Hrvatski vojnik editorial could not have come in the better time, as I was having a large amount of raw material on most diverse aspects of flags,history of military flags development, as well as on flags of our units from the Homeland War and some that appeared afterwards.

The editorial board quickly accepted my proposal for the column concept to have two thematically separate and not necessarily linked parts – the first to deal with general vexillological topics, while the second to present a unit flag of the Croatian Armed Forces. It seems that such concept proved to be successful, if you allow me to subjectivly evaluate it by feedback I received from readers. Many expressed their interest in reading both the first and the second part of the column. Far from that in the hundred text I have not made any mistake, but from only a few negative feedbacks I got, there were, apparently, no major factographic errors pointed. A carful reader might notice that I could have possibly researched the history of units a bit better or got better info on present location of this or that flag and similar. Certainly, more thorough research would have provided better info, but it would be illusory to try something of the sort in the provided time frame and the regular job. The advantage of scientific writing, even in the professional and popular medial like this, that the incomplete and even erroneous information, may be used as guides, and then be corrected thanks to more detailed further research. Until the scientific truth comes out, a series of successive research must be done, often among number of researchers. It is so in the natural and in the social sciences, and, of course, it is so in vexillology.

FROM ANCIENT CHINA TO MODERN EUROPE

In the hundred sequels of Veksilology a range of topics was covered: from the meaning of flag as a unit symbol, through the story of the development of military flags throughout the history, from ancient China to modern Europe, the development of military flags on Croatian territory, specifics of development unit symbols themselves. Often our flags from the Homeland War may be phenomenologically compared with some other military flags resulting in somewhat similar circumstances, in at first glance quite diverse armies – for example, the unit flags of Boer commandos from the end of the 19th century or the ship flag of the French Navy in the second half of the 20th century. The topics covered related to the development of vexillology in the world and in Croatia, followed by a lengthy review of modern military flags – what they look like and how they are used, with particular reference to the practice of the NATO members. A bit longer the the previous year we were looking at how the flags are used at sea or in the navies, which today all over the world retain the tradition of using a set of signaling and position flags and pennants. These have not only the effective function, but are also part of the military and national identity and represent their country all over the wide seas. That is why it was followed, and still continues, with a series of articles on the naval flags, not only allied countries, but also of other navies, all with slightly different practices that together makes a unique corpus naval tradition.

When an opportunity rose, instead of the regular columns, reports and impressions from the international flag conferences and scientific meetings in Croatia dealing with vexillological topics and war were presented. In particular, it was interesting to note in the column the introduction of some new flag in the Armed Forces the Croatia.

The second part of the column presented some hundered (occasionally two or more flags were presented) unit flags, mostly from the Homeland War period or immidiately afterwards. The majority of those are today kept in the Ministry of Defence Military Museum or in the Croatian Armed Forces General Staff flag collection, and only a few of them were presented from photographic evidence only. A considerable number of units flags is today preserved in museums and memorial rooms all around Croatia, some of which I know of, while others, unfortunately quite unknown to me. It provided me particular pleasure when I had chance to present such flags of which I learned from info received by teh Hrvatski vojnik readers. As a rule, they served or still serve under those flags and are rightfully proud of them. It shall be my honour to do similar with flags of other units that haven’t yet made the queue and let this be a call to you to help we snatch these flags out of falling into oblivion, to preserve the memory to the glorious days when the freedom we enjoy was won.

For the end of this sequel, here is a flag of the Croatian Armed Forces General Staff, made in 1994., black with an oval yellow emblem bordered in the top with a golden tripple-wattle ornament and in the bottom with a yellow edged black border inscribed with yellow “GLAVNI STOŽER OS RH” (the CAF General Staff),in the centre of the emblem, behind a golden edged tricolour shield with the coat of arms of the Republic of Croatia, two swords in saltire, each with a rectangular wattle ornament at the crossbar, above them golden air force wings and in the base an anchor. ■ 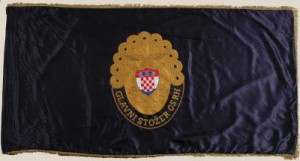 The flag of the Croatian Armed Forces General Staff – Zagreb

Additional info on CAF unit flags, photos of their use, info on their creation as well corrections and other that may help creating comprehensive history of our unit flags, please provide to zastavehv@gmail.com. Thank you in advance.