The director of the Croatian History Institute Dr. Jasna Turkalj greeted the audience as the host, followed by the word by head of the other organizing institutions – director of the Croatian History Museum Matea Bristilo-Rešetar, Grand Master of the “Brethren of the Croatian Dragon” Society Prof. Dr. Nevio Šetić and president of the HGZD LtC Dr. Željko Heimer. The representatives of the high patrons greeted the gathering – Renata Margaretić Urlić, counsellor of the President for social affairs and youth, Dr. Tomsilav Sokol, MP and MSc. Zvonimir Frka-Petešić, Chief of Staff of the Prime-minister.

The Croatian History Museum exhibited particularly for this occasions the priceless 170 years old installation flag of the Ban Josip Jelačić, the first Croatian red-white-blue tricolour in official use. That flag was received by the Ban as the symbol of his honour and office on 5 June 1848. During the gala the flag was guarded by a honour guard composed of the members of the Honour and Security Battalion of the Croatian Armed Forces, in their ceremonial dresses. They also performed the ceremonial changing of the guard during the event.

The introduction was the Croatian national anthem, sung by the Academic Male Choir of the Faculty of Electrical Engineering and Computing, led by the conductor mo. Josip degl’ Ivellio. During the event they also performed the almost forgotten song “Croatian Banner” by Vilim Just and number of well known patriotic songs from the 19th century.

Finally, Dr. Jareb, in the name of the organizers, red a Proclamation, in which these four institutions start the initiative to establish the Day of Croatian Flag, as an official memorial day on 5 June, to be marked annually in Croatia. 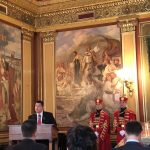 See also the HGZD News repository Some announced activities had to be postponed due to pandemic and earthquake. We already did some of them in new dates, and we are working diligently to catch up with the others soon 12 Mar 2020 18h ♦ lecture by Željko Heimer: "Flags of the Homeland War and Wartime Units from Bjelovar", Croatian Matrix Chapter in Bjelovar, Society for Preservatin of Croatian Military Traditions Bjelovar and HGZD, great lecture hall of the Bjelovar University of Applied Sciences, A. B. Šimića 1 POSTPONED HGZD News 8/2020 23 Mar 2020 18:30 ♦ book promotion Ana Marija Ambrušec: "Heraldic Heritage of the Križevci and Kalnik Region", Meleagrina, Vrbovec and HGZD, Zagreb, 2019. Auditorium of the Croatian Nobility Union, Teslina 13/1, Zagreb POSTPONED HGZD News 10/202027-29 May 2020 ♦ 10th annual vexillological Seminar "In Hoc Signo Vinces" Armémuseum, Stockholm, Sweden POSTPONED